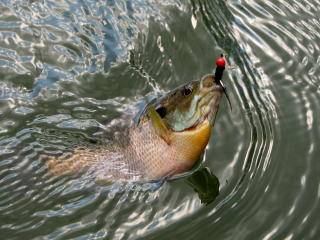 You'll love bluegill fishing when you're catching one big bluegill after another.

And you'll enjoy it even more when you're eating a platter of the golden-fried fish.

If you know where bluegills live during each season, you will save lots of fishing time and fill your stringer faster!

We'll get to bluegill location secrets in a second. I'll also give you some ideas for baits and lures. But first, it's time for a little...

Bluegills are mainly freshwater fish. They are native to the eastern portion of the United States. Due to stocking, you can now go bluegill fishing almost everywhere in the continental United States, as well as in parts of extreme southern Canada and northern Mexico.

Bluegill thrive in vastly different ecosystems. These include natural lakes, small and large rivers, reservoirs, the Great Lakes, streams, ponds, mining pits, and even in the slightly salty water of estuaries. They prefer to live in areas with still water or just a slight current.

Bluegills are awesome creatures. The fish have incredible vision; they can see really small stuff like phytoplankton and zooplankton. For the bluegill, zooplankton are a major food source. 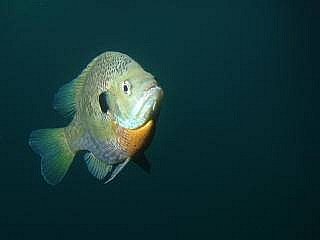 Bluegills use their eyes to spot food above and below themselves. They then swim up or down in the water column and suck in the food with their small mouths.

Bluegills feed all year. However, the amount they eat varies. Usually, the warmer the water, the more they eat.

People who know how to locate fish can catch big bluegill. Folks who don't understand them can only rely on luck. It's that simple.

Here are some bluegill fishing tips that will help you find them year-round.

Generally, in late winter the bluegills are bunched together tightly in deep areas. They remain in these groups until the water warms up to between 50 and 60 degrees. The fish then move closer to shore. They use shallow weeds left over from the last year plus new weed-growth.

At this time in the year, the shallow areas of a lake are the warmest. Weeds hold food at this time, and the bluegills show up to eat. These areas are usually 5-15 feet deep, depending on how clear the water is.

Bluegill fishing is slow at this time of year and the bluegills are not very active. A few can be caught if you're patient.

As spring ends, water temperatures increase and bluegills eat more. They are more active now. They spend time in relatively shallow areas close to spawning sites. On warm days they move into the shallow spawning areas; on cold days, they move back out again.

When the surface temperature gets to about 68-69 degrees, the bluegills spawn. Males build nests in really shallow water. We're talking between 1 and 2 1/2 feet deep. The bigger bluegills tend to be slightly deeper than the others. Bluegill fishing starts to heat up.

Nests are built on bottoms composed of sand or very small pebbles. The male bluegill fans out the nest with his tail. The nest is circular, usually 12-20 inches across and a few inches deep. There are usually dozens of nests right next to each other.

Females then move onto the nests and breed with males. I've observed fish spawning in the wild and it's pretty neat to watch.

A male and a female bluegill turn on their sides in the water, their bellies facing each other. Then they swim in place while the reproductive cells from both come out of their bodies into the water. The eggs are fertilized and sink to the bottom of the nest.

The females then leave the nest, and they begin to eat and recover from the act of spawning. Males stay put, guarding the eggs from predators, which usually include other panfish.

The males guard the newly hatched fish (called "fry"), for a few days, then abandon them to their own luck. Most will be eaten by predators, but enough survive to keep the bluegill population intact and provide good bluegill fishing for the future. 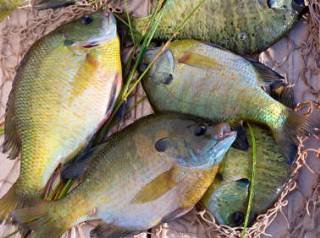 Bluegill fishing is easiest at the spawn. There are often hundreds of fish using a small area, so you get a slew of bites.

I've caught some of my biggest and prettiest bluegills off the spawning beds. You can have a real blast doing this every year!

Here are a few key bluegill fishing tips: Fish will use the spawning areas you've found year after year, so your efforts at locating bluegill bedding sites could pay off for decades.

Another thing to keep in mind is that some bluegills will spawn multiple times during the summer. So you'll want to check again for nesting areas as the year goes on. Bluegills spawn deeper each time.

The fish are said to spawn in the days around the full and new moons every month during summer.

The dinky bluegills and the keeper-sized fish have different habits. Small fish spend the summer in the shallows, though occasional decent-sized fish are there too. The keepers first go back to the areas they were using right before spawning.

Then, the bull bluegills pull a sneaky trick: they move to deep weed-edges, sunken islands, and humps. They spend the summer out there, often far away from fishermen. That's why it's so easy to catch dinkers all summer off a dock, but often hard to find keepers there.

In summer, the key is to look for adult bluegills near the bottom of the deep weed-edge. The best spots along the weed-edge will be those that are unusual. Inside turns, points, and other irregular spots are better than solid, straight lines of weed-growth.

When fish are located, a live-bait like leeches, worms, or crickets is the best choice for bluegill fishing. A slip-bobber rig makes it easier to cast and fish these somewhat deeper areas.

Where legal, you can fish with more than one bait per line, set to fish at different depths. This may help you find the depth the fish are using more quickly. Also, you may catch two fish at a time while doing this.

Bluegills can also be found hovering over open water, feeding on plankton. A depthfinder and underwater camera can be used to find fish along weedlines or over open water during summer. 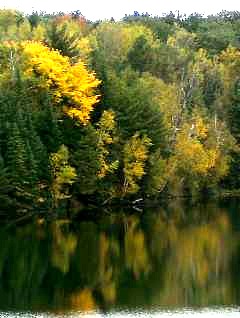 Bluegills detect the change of the seasons, and begin to move shallower. They use drop-offs at this time of year.

The lake will eventually cool to a point where fall turnover begins, usually around 58-60 degrees surface temperature.

It's very hard to find groups of fish around turnover, so it's best to go to a lake where it hasn't yet occurred.

You can also go to a river or stream, since neither turns over.

For fall fishing, I recommend you use live bait. The fish won't chase lures near as much. The water temperature drops and bluegills slow down.

In early winter, bluegills spend much of their time around shallow cover. Beneath the ice, they feed on zooplankton. To locate fish, it's best to start by finding obvious structure such as points and rock humps.

The next step is to find cover in these areas. Cover usually means remaining weeds or wood. The fish often hang around the edges of the cover.

Then it's time to drill a number of holes through the ice in these spots. Your electronic gear (depthfinder, flasher, underwater camera, even GPS) is very helpful as you search for fish.

A good plan is to fish a little while in each hole, then move to other holes until you find good-sized bluegills. Fish of the same size will be schooled together.

Sometimes the larger bluegills tend to be just a couple feet or less from the bottom. Small fish are often higher in the water column.

If you go bluegill fishing with a veteran ice-fisherman, it makes finding fish easier. An experienced angler knows where to search for bluegills, and remembers good spots from the past. It's also safer and more fun to go ice-fishing in a group. 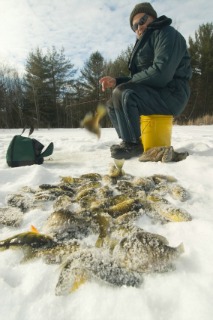 As winter goes on, it's a good idea to keep trying spots that have worked recently.

However, the fish will eventually eat most of the food in these areas and move. Then it will be time to find the big bluegills again.

The periods right at first ice and right before ice-out are both great times for catching keeper 'gills. But be careful! The ice is thinnest at these times.

In late winter, bluegills will be around dropoffs. The fish are likely to be in the same places where you found them during the fall.

Bluegill fishing through the ice is a challenge, but it's fun (if you're dry, warm, and catching fish).

Ice-fishing is a great sport for the serious angler, and some very nice bluegills are caught during the winter every year.

The general yearly pattern is the same in reservoirs as in natural lakes. As the water warms in early spring, bluegills come to areas with some depth near spawning sites. The fish use shallow coves or creeks to spawn. They like to have some cover, as well as the right bottom type.

After spawning, big bluegill go back to the main part of the reservoir. They use areas with weed and wood cover in 10-20 ft. of water. They will use deeper water than that when the weather gets very hot. Again, bluegill fishing with a slip-bobber is a top choice in summer for getting baits deep.

As in lakes, it's also possible to find bluegills and other sunfish species suspended in reservoirs.

In fall, the fish move shallow again, often holding near drop-offs. Bluegills move to deep areas in late fall and stay deep through winter. Then the yearly cycle repeats.

Once you find bluegills, the next step is getting them to eat your bait.

Baits are the name of the game with bluegills and other sunfish species. Key baits include

On occasion, other less-known baits work too. For instance, you can try

It's best to use small baits when water temperatures are cool. In winter, really small baits like maggots and wax-worms are the way to go. These are presented on ice flies and tiny jigs through the ice.

In the summer, you're likely to do better with larger baits. Bluegill also go after lures in the summer. 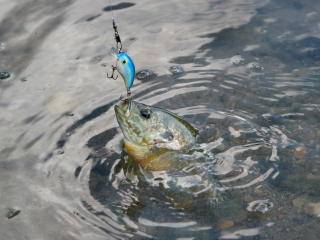 For bluegill fishing with flies, you can use poppers, various dry and wet flies, and rubber spiders.

Bluegill lures should be retrieved rather slowly, because most things that bluegills eat are slow-moving. The fish aren't used to chasing down food.

For bluegill fishing with bait, size #10 hooks or even smaller are great. Bluegills have very small mouths. A bluegill lure should also have small hooks.

For larger bluegills, a #6 or #8 hook is fine. I advise using long shank hooks because they are easier to get out of a fish's mouth.

To learn more bluegill fishing tips, including how to target big bluegill (and even trophy bluegill!), click this link. Plus I'll tell how you can catch FIVE TIMES AS MANY bluegills using some simple tactics!

Back To Essential Fish Facts You Must Know